Almost two years ago, our family moved from Dallas to Barcelona. It’s been quite an adventure for each one of us…

With a café on every corner, boutiques on every block, and plenty of intriguing museums and historical sites, Barcelona is certainly a haven for adults. The weather is pleasant. The scenery is beautiful, and it’s perfectly acceptable to drink either a coffee or a beer at 10 a.m. Everything is within walking distance, and by the time you’ve lived in Barcelona a few months, you won’t be able to go more than two blocks without seeing a familiar, friendly face.

However, Barcelona through the eyes of a child is something even more magical. Playgrounds, bakeries, and ice cream shops are ubiquitous. It seems nearly everywhere we go, we find a playground tucked in a square, and my children are instantly drawn to it as if by some invisible magnetic force. While the playgrounds are plentiful, they are all unique. Some have ropes to climb, others a wooden climbing wall, a couple others have a bucket hanging from a pulley to transport sand. When my children seem exhausted from walking and begin to feel like their legs just won’t move, suddenly the sight of a slide or a swing gives them renewed energy, and they’re running again.

Beyond the playgrounds, Barcelona has plenty to stimulate the imagination. While Gaudi’s colorful mosaics attract adults across the globe, they glitter especially brightly in the imaginative eyes of children. The first time I took my two children—ages three and four at the time—to Park Guell, my daughter said it looked like “Enchancia” from Disney’s Sofia the First show, and henceforth she referred to it as “the fancy park.” My daughter is also a fan of what she calls Gaudi’s “enchanted houses,” especially Casa Batllo (my favorite as well) with is cool blue tones, ocean motifs, and undulating curves. Each time someone comes to visit us in our new home, she asks to take them to this glistening blue home, and so far, everyone shares her enthusiasm.

My children are both intrigued by the Torre Glòries, the emblematic skyscraper in Barcelona’s Poblenou neighborhood. It’s been described as “bullet-shaped” and supposedly the architect, Jean Nouvel, intended it to resemble a geyser. But for my son, it is always a rocket, and when my daughter saw it glistening in the sunlight, it was the “Crystal Empire” from My Little Pony.

Aside from the magic of the parks and architecture, every-day life for my children is rather pleasant here in Barcelona. One of our first findings was the bakery on the corner less than a block from our apartment. My daughter stared excitedly at all the croissants and pastries topped with fruit, chocolate or dusted in sugar. Then she pointed to a large baguette.

She took it home and bit straight into the end of it, and proceeded to eat happily through three-fourths of the crusty loaf.

I thought choosing a school for my young English-speaking children might be difficult, until we walked into the small school directly next to our apartment. It turned out to be an easy choice. There are three types of schools here in Spain, public, private, and concertadas, which are a hybrid public-private school. They receive some government funding but also rely on a small tuition from the families. Instead of a €10,000 annual tuition at a private school, we pay less than €300 per month for each child. The kids are in school from 9 a.m. to 5 p.m. with a break for lunch in the middle of the day, although there is an option to stay at school for lunch and activities for an extra fee.

Both of my children made friends relatively quickly, despite not speaking Catalan or Spanish when we arrived, and they’ll continue to build those same relationships in the years to come. They remain with the same class of children year after year, so the families get to know each other well and the children grow up together.

Just as with the bakeries and playgrounds, friendly faces seem to surround us wherever we go. The cashier in the grocery store and the women at the bakery are all familiar faces. When we walk out our door on a Saturday, it’s not uncommon to see a friend from school coming down the sidewalk. When we head to the playground after school, we often see up to five or six classmates from each of my children’s classes, and when we return home in the evening, our doorman, is waiting with candy and smiles to welcome them home. 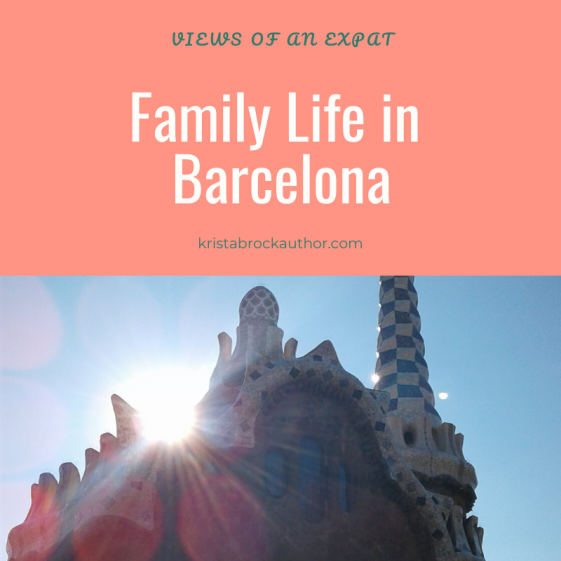 2 thoughts on “Family Life in Barcelona: Views of an Expat”