School start times can be a hot-button issue. California just mandated later school start times for public schools across the state, something that is generally left to local school districts to decide. In fact, California is the first state to create such a law.

The California school start time law requires that middle school classes start no earlier than 8 a.m., and high school classes may not start before 8:30 a.m. Schools have until the 2022-2023 school year to implement the new start times.

Data compiled by the Centers for Disease Control and Prevention reveals that as of the 2011-2012 school year, the average start time for middle school and high school students in California was 8:07 a.m. with some schools beginning before 7:30 a.m.

Why Should We Care About School Start Times?

In a policy statement, the American Academy of Pediatrics suggested starting school before 8:30 a.m. can contribute to insufficient sleep in adolescents. “Furthermore, a substantial body of research has now demonstrated that delaying school start times is an effective countermeasure to chronic sleep loss and has a wide range of potential benefits to students with regard to physical and mental health, safety, and academic achievement.” 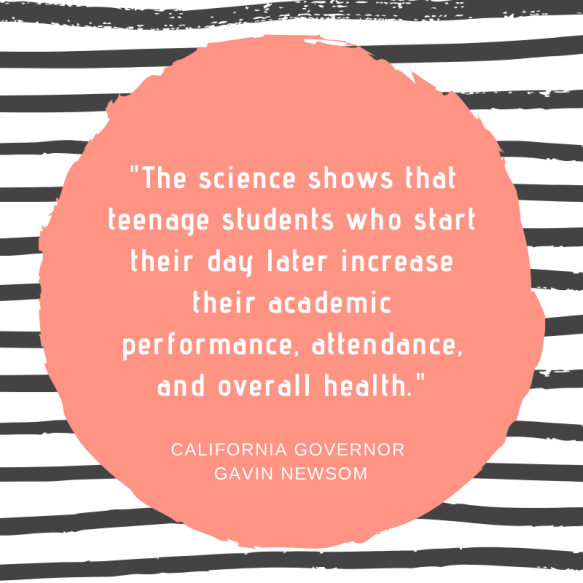 Who Wants to Start School Early?

Like anything that enters the political spectrum, the new California school start time law has staunch supporters and outspoken opponents. If physicians and medical experts are arguing for later school start times, who is arguing against it and why?

They argue that delaying schools tart times makes it harder for working parents to get to work and get their kids to school.  They say some parents will drop their children off early, regardless of the start time, they argue, and there will not be supervision for these children.

Teachers unions advocate that school schedules be determined at the local level. About 60 percent of high school students in the United States experience daytime fatigue, according to the National Sleep Foundation. This can affect the academic, physical, and emotional well-being of these teens.

Teenagers need between eight and nine hours of sleep each night, and their circadian rhythms put their natural bedtime sometime between 10 p.m. and 11 p.m.  Expecting them to be in class learning at or before 8 a.m. guarantees they will be sleep-deprived.

What Time Does School Start?

Here’s a look at school start times in different countries around the world.

What time does school start for your kids? Do you think it’s too early?